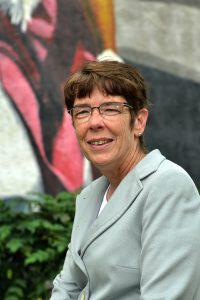 Sister Mary Scullion has been involved in service work and advocacy for homeless and mentally ill persons since 1978. She was a co-founder, in 1985, of Woman of Hope, which provides permanent residential and support services for homeless, mentally ill women. In 1988, she founded the first Outreach Coordination Center in the nation, an innovative program coordinating private and public agencies doing outreach to chronically homeless persons living on the street.

In 1989, Sister Mary and Joan Dawson McConnon co-founded Project HOME, a nationally recognized organization that provides supportive housing, employment, education and health care to enable chronically homeless and low-income persons to break the cycle of homelessness and poverty. Under their leadership, Project HOME has grown from an emergency winter shelter to over 700 units of housing, including JBJ Soul Homes which provides supportive housing for homeless youth, and three businesses that provide employment to formerly homeless persons.  Project HOME also prevents homelessness in a low-income neighborhood in North Philadelphia.  This initiative includes economic development, homeownership for the working poor, and the Honickman Learning Center and Comcast Technology Labs – a 38,000 square foot, state-of-the-art technology center that offers comprehensive educational and occupational programming.

Sister Mary is also a powerful voice on political issues affecting homelessness and mentally ill persons. Her advocacy efforts resulted in the right of homeless persons to vote as well as a landmark federal court decision that affects the fair housing rights of persons with disabilities.

Sister Mary has received numerous honorary doctorates for her leadership in the City of Philadelphia. She was named 2011 Citizen of the Year by the Philadelphia Inquirer and selected by Time Magazine as one of the “World’s Most Influential People in 2009”. In addition, Sister Mary and Joan Dawson McConnon received the Laetare Medal from the University of Notre Dame in 2011.  She was awarded the Eisenhower Fellowship in 2002 as well as the Distinguished Alumnus Eisenhower Award in 2010.

Sister Mary serves on the Board of Trustees of St. Joseph’s University; the Board of the Jon Bon Jovi Soul Foundation and Chaired the Hunger and Homelessness Committee for Pope Francis’s visit to Philadelphia in 2015.