When Bon Jovi’s This House Is Not for Sale Tour touched down at the Talking Stick Resort Arena in Phoenix on March 4th, it was “Bon Jovi Day” in the city – officially. Before taking the stage, the band was presented a proclamation from Phoenix Mayor, Greg Stanton, by Phoenix Suns President, Jason Rowley, and Sr. VP and General Manager for Talking Stick Resort Arena, Ralph Marchetta. 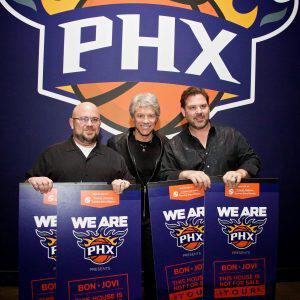 Rowley and Marchetta were also on hand to make an announcement with Bon Jovi, as the Phoenix Suns and the band have partnered for an exciting charity auction. In an effort to raise funds for Phoenix Suns Charities and the Jon Bon Jovi Soul Foundation, the Suns have designated two pairs of season tickets and each pair will be matched with a prize pack featuring autographed Bon Jovi memorabilia, souvenirs, and merchandise.

Bids on the auction items will be accepted from noon MT on Thurs., March 9 through noon on March 19 at www.ebay.com/jbjsuns. 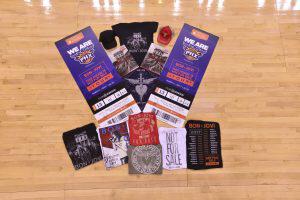