Bryan Stevenson, the founder and executive director of the Equal Justice Initiative, received an Honorary Doctor of Laws degree, while musician/philanthropist Jon Bon Jovi, chair of the Jon Bon Jovi Soul Foundation, received an Honorary Doctor of Letters degree. Both awards were presented by Phoebe A. Haddon, chancellor of Rutgers University–Camden, before an audience of more than 3,000 that included 293 students receiving their master’s and doctoral degrees at that specific event. Overall, Rutgers University–Camden awarded 1,749 degrees at five separate ceremonies throughout the day.

During the event, Bon Jovi debuted and performed a new song, “Reunion,” that he wrote specifically for the Class of 2015 at Rutgers University–Camden. In his comments, Bon Jovi advised the new Rutgers–Camden graduates: “Life is a long, bumpy road, but that makes for an exciting ride. Choose a direction and if the road turns – turn! If there is a fork in the road – take it! It’s OK to map out your future… but do it in pencil.”

To watch Jon Bon Jovi’s speech and hear the new song he wrote for the graduates, please click here. 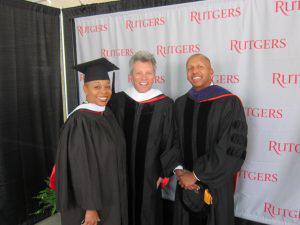 “I’m proud to be a part of commencement at Rutgers–Camden given the University’s emphasis on civic engagement and social justice. Students are encouraged to get proximate to problems and issues in our community which enhances their education in critically important ways,” says Stevenson.

“These are two extraordinary honorees whose careers uplift the lives of everyone they touch,” says Haddon. “Both give voice and hope to under-served citizens and communities, and their leadership is an inspiration to everyone committed to equal justice in all areas of society and life. As an institution selected by the Carnegie Foundation for the Advancement of Teaching to receive its Community Engagement Classification, Rutgers University–Camden is committed to developing the next generation of civic leaders, and Prof. Stevenson and Mr. Bon Jovi are outstanding role models for that goal.”

A national leader in the fight to ensure that every American has the right to fair and equal treatment under the law, Stevenson leads the Equal Justice Initiative in Montgomery, Ala. A professor of clinical law at New York University, he is a widely acclaimed public interest lawyer who has dedicated his career to helping the poor, the incarcerated, and the condemned. He is the author of the critically acclaimed New York Times bestseller Just Mercy, which was named by Time magazine as one of the 10 best books of nonfiction for 2014.

Bon Jovi’s Soul Foundation is a nonprofit organization dedicated to bringing about positive change and helping the lives of those in need. Musically, the Grammy Award-winning rock band Bon Jovi has set the bar for over three decades as one of the most successful rock bands in the world. Globally, they have sold more than 130 million albums and performed more than 2,900 concerts in over 50 countries for more than 37.5 million fans. Most recently, Bon Jovi’s 14th album, “What About Now,” debuted at No. 1 around the world while the accompanying world tour became the No. 1 tour.

As the southernmost campus of Rutgers, The State University of New Jersey, Rutgers University-Camden enrolls 6,535 students in 39 undergraduate and 29 graduate programs, including five doctoral programs and South Jersey’s only law school. The institution is recognized nationally for its innovative civic engagement program, which has earned the prestigious Community Engagement Classification from the Carnegie Foundation for the Advancement of Teaching. The faculty are respected internationally for their significant contributions to the advancement of knowledge across many disciplines and consistently command funding from such top federal agencies as the National Institutes of Health, the National Science Foundation and more. During the past four years, two Rutgers-Camden faculty members were named MacArthur Fellows, the highly coveted “Genius Grant” honor. Located in the heart of the University District at the Camden Waterfront, Rutgers University–Camden is known for its personalized and supportive approach to helping students achieve their goals.

Transitional housing for homeless women and children to add 8 apartments

The grant from the New Jersey-based charity will be used, in part, to help the Rockdale County transitional housing project garner more community support. Phoenix Pass will need to raise an additional $40,000 from the community to partially match the Foundation’s grant and complete its capital campaign.

“Jon Bon Jovi Foundation really tries to help families in economic stress,” said Marcie Howington, Executive Director of the transitional housing program. “They have been overwhelming with their support and they’ve been very happy with the program we’ve had with our first set of apartments.

Located on the Light House Village campus at 541 Sigman Road, Phoenix Pass is a partnership between First Baptist Church of Conyers and Rockdale Emergency Relief, a non-profit organization supported by United Way in Rockdale. During construction, HomeAid Atlanta, will partner with Phoenix Pass by providing donations of providing donations of professional construction services.

The apartments provide transitional housing for families in crisis, offering independent living and preparing them to be self-sufficient. In addition to providing stable housing, the program provides services and resources to help families rebuild their lives. The families are then expected to transition back into the community as productive and self-sufficient citizens.

The apartments, she said, gives them something to be proud of, and it gives them hope for the future.

It’s not the first time the Jon Bon Jovi Soul Foundation has given to Phoenix Pass, which is the only project in Georgia it funds. In 2010, during the first phase of construction, the foundation donated $60,000 to the project. Since then, the Conyers-based project has kept in contact with the foundation, sharing success stories about the families that have graduated from the program and sending Christmas cards, said Howington.

Mimi Box, Executive Director of the Philadelphia based nonprofit, said Conyers stood out for several reasons, including the strong partnership between the Phoenix Pass project and Rockdale Emergency Relief that would “enable the program to focus on the needs of the families who would be in residence. Support that empowers individuals to rebuild a productive, self-sufficient lifestyle is an important component of any build we do.

“The need to address the issues of the chronically homelessness as identified by the county school system was so compelling, we had to act,” she said. “So when they were ready with Phase II of this project, we, too, were ready to respond – again with the ‘gap’ funding that would be needed to move the project forward.” Box said.

Originally, the second phase of the Phoenix Pass project was to break ground in January of this year, but “we wanted to wait until the weather was more temperate [to begin construction],” Howington said.

They also wanted to have at least 75 percent of the $600,000 capital campaign raised before breaking ground, she said. “Getting the $60,000 puts us so close to our goal. Once we raise the $40,000 [from the community], we will be able to move forward debt free. We hope to have the construction completed this fall, with families moved in by the end of the year.”

The non-profit has raised more than $500,000 since July. “We’ve been really blessed with support from individuals to corporations and businesses,” said Howington.

The new units will double the size of the existing program, making it possible to serve eight additional families of single women and their children. The $600,000 construction project will add six two bedroom and two three bedroom apartments, as well as a classroom, a bigger laundry facility and office space. Two of the apartments will be made available to women veterans with children. Referrals will be done through United Way of Greater Atlanta.

The expansion of the transitional housing program is needed, she said. Recently, an apartment became available and there were 85 applicants. “It was overwhelming for us, and disheartening to applicants,” she said. “People are shocked to learn there are over 400 kids who are identified as homeless. There are [others] who sleep in cars or who couch surf week-to-week, and they may not be included in that number.”

Once the buildings are completed, Howington said, Phoenix Pass will need volunteer help to prepare and furnish the apartments.

For more information or to donate online, go to phoenixpass.org.

To read the original story on Rockdale News, visit rockdalenews.com.